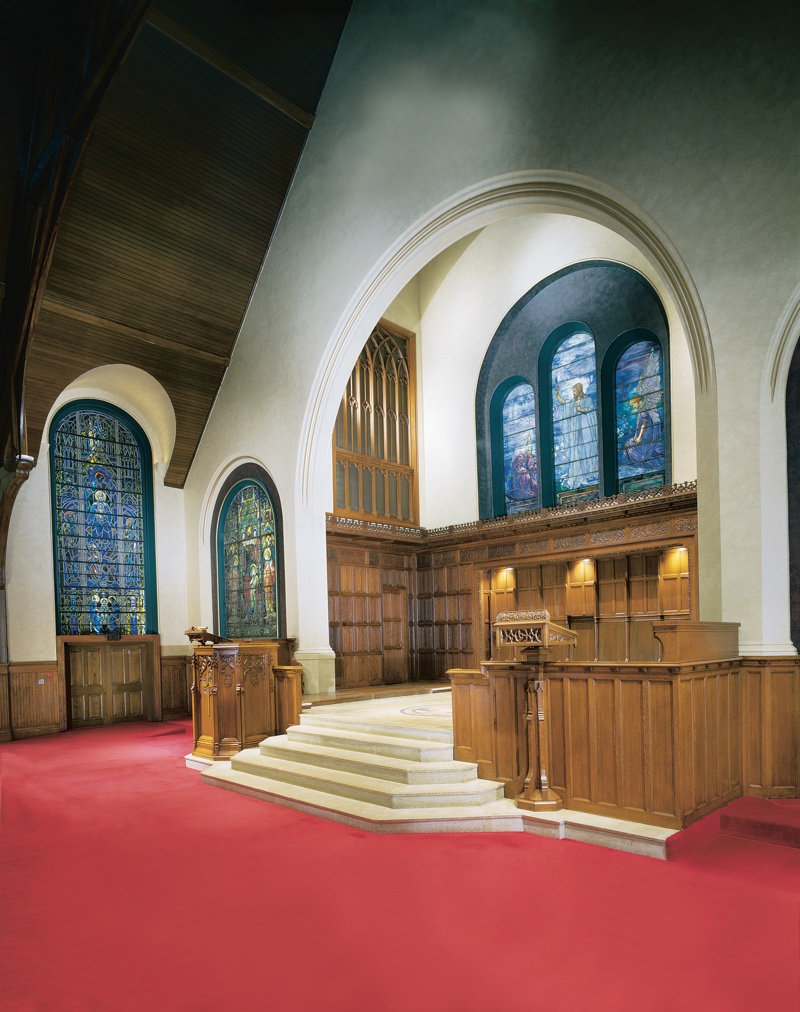 The interior restoration project Fortune Restoration accomplished at the First Presbyterian Church of Lake Forest was a grand Church interior paint preservation project. The amount of work that went into exposing the original work done by renowned Louis Comfort Tiffany of New York City was a great success. After stripping off layers of old paint, Fortune Restoration’s Church paint services went to great lengths to fruitfully reproduce interior finishes fashioned by Tiffany over 100 years ago.

As early as 1856, the Reverend Robert Patterson and members of the Second Presbyterian Church of Chicago began to visit the area which became Lake Forest, with the intention of beginning a community which would focus on establishing a Presbyterian university for this region. On July 24, 1859, the First Presbyterian Church of Lake Forest was formally organized with a membership of fourteen persons.  Meetings were initially held in the Chapel of the Lake Forest Academy. The Reverend William Cowper Dickinson, an Academy faculty member, conducted many of the early services and was called as the first full-time pastor in 1862, the year the first church building was erected, described:  “a Gothic design frame cottage in the form of a cross, with a pointed roof, two low spires on either side of the front door, and windows of clear glass.”

In 1886, plans for the present church on Sheridan Road were commenced to the design of Charles Sumner Frost of Chicago’s Cobb and Frost. The stones of this building came largely from the Second Presbyterian Church of Chicago, then at Wabash and Washington Streets, which had burned in the Great Fire of October 1871. By the time of the fire, Second Church had sold the property to Timothy Wright and Joseph and John Medill.  When the church building burnt, Wright had the stones shipped to Winnetka, where he had planned to build a church in memory of his mother near his residence.  For unknown reasons, this did not occur, though Wright had belonged to the Unitarian Church in Winnetka, which eventually became the Winnetka Congregational Church.  Wright sold the stones to Robert Hall McCormick, of the well-known McCormick family, who were Presbyterians.  McCormick had originally planned to build a residence for himself with these stones, on property west of Lake Forest.  The stones still sat unused for several years, until the Lake Forest Church purchased them for use in their present building. The church was dedicated on June 1, 1888.  Dr. Patterson, who had presided over the dedication of Second Church, Chicago, both the Wabash and Michigan Avenue churches, preached at this dedication as well.  In 1902, Louis C. Tiffany of New York City, New York, redecorated the sanctuary.  Over the course of several years thereafter, a triptych of windows above the chancel and several windows along the nave were installed in the nave Tiffany.  One of these windows was given in memory of Lily Reid Holt, in whose name the Chapel of Lake Forest College was built.  Additional windows were eventually done by Charles J. Connick, Franz Schroeder, Frank Drebobl, Henry Wynd Young, and Botti Studio of Architectural Arts, Inc.