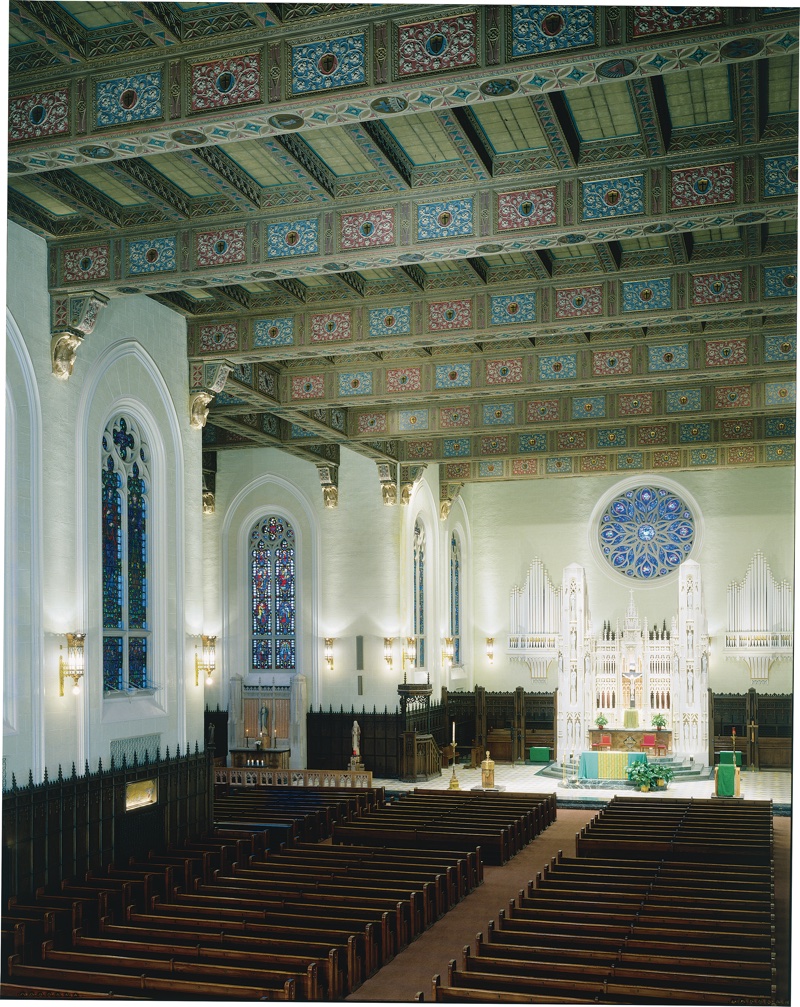 As the Church paint contractor for the interior paint project at St. Philip Neri, Fortune Restoration restored this Chicago based Catholic Churches complex interior finishes. The interior painting project restored some of the Churches delicate features that make this grand Church unique in its own right. The interior Church restoration for this project had to be perfectly matched as to keep the feel of the original work alive and consistent. The beautiful Church interior décor has been revitalized and ready for another 100 years of worship.

The first parish Mass was offered by Father Kinsella on the First Sunday of Advent, December 1, 1912 in the small chapel of the Catholic Church Extension Society building located at the corner of Clyde Avenue and 72nd Street. The Parish boundaries of the newly formed parish were Jackson Park on the north, Lake Michigan on the east from 67th Street to 73rd Street, then west to Yates Avenue then south on Yates to 76th Street. The southern boundary was 76th Street. The western boundary, Cregier. Later the southern boundary was moved back to 75th Street. Otherwise the parish boundaries remain the same to this day.

In January 1913, plans were started for the first parish building, a combination school and church located at 2110 East 72nd Street. The first floor of this building served as the church; the second floor had four classrooms, but only two were used for school at first. The other two classrooms were used as living quarters for the pastor. A faculty of three Adrian Dominican Sisters taught the entire eight grades the first year the school was opened. The following year the faculty was doubled and Father Kinsella moved out of the school to a frame house at the southwest corner of 72nd and Merrill in order to make room for more classrooms. This original school building still stands as the front part of St. Philip Neri School. It now houses the Rotunda, Office, Teacher’s Lounge, Library and Computer Room on the first floor and rooms 201, 202, 203, and 204 on the second floor. By the time this building was dedicated on April 26, 1914, the parish had grown to 60 families. So rapidly did the school grow that five years later the school had to enlarge to its present size with eight classrooms on the second floor alone. By 1919, sixteen classrooms had to be improvised on the ground floor and second floor. The church remained on the first floor sandwiched between classrooms on the ground floor and second floor. By 1925 five hundred ninety-five students were enrolled in the elementary school.